Scarlet has been confirmed in foal to Farmer for a 2014 foal. 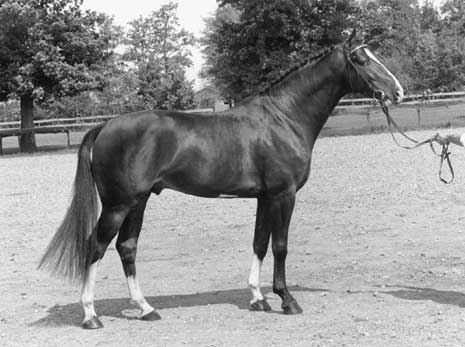 Farmer was sired by the noble Voltaire, who had a successful show jumping career and is a product of a combination of performance blood that has made history: Furioso 11 x Gotthard. Furioso 11 can be called the Oldenburger stallion of the 20th century. He produced 200 national premium mares and 68 approved sons standing at stud on several continents.

Wulia is Farmer’s dam. She carries the predicate ‘keur’ and is by the celebrated ‘preferent’ Amor, a stallion that produced an impressive amount of prominent sport horses. Apart from good show jumpers, Amor also sired a number of remarkable dressage horses that made him number fifteen in the index.

At his performance test in 1990, Farmer proved to be a friendly, playful, alert, honest and obedient stallion that showed great willingness to work. He scored three times a 9 (for temperament, stable manners and the training report) and four times 8 (for trot, canter, jumping and the cross country). Farmer was the Reserve Champion of his year. He was described as a very talented dressage horse and a fairly talented show jumper.

In 1992 a uniform collection of Farmer products was shown. They were well-developed foals, with attractive and expressive heads. The neck is sufficiently long with a fine upper line and good poll, well carried in action. The jury had a lot of praise for the strongly muscled back and loins and the exceptionally correct, hard and dry bones of Farmer’s progeny.

In August 2013 we welcomed Alverose Imagination to the world, sired by Furst Grandios out of our head mare, CP Imogen. 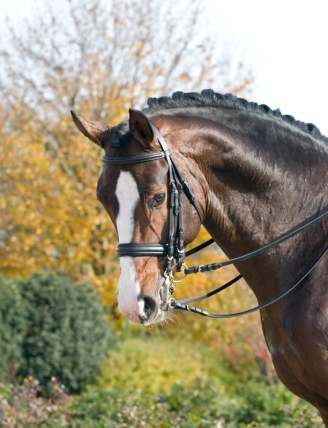 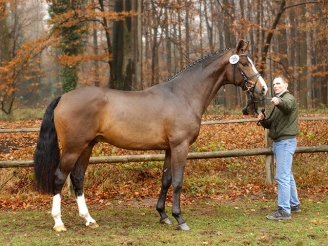 FUERST GRANDIOS a charismatic stallion of outstanding quality. Correct conformation combined with athtletic swinging paces. FUERST GRANDIOS was Reserve Champion at the 2004 North-Rhine/Westphalian licensing in Muenster Handorf, and winner of the Stallion Performance Test in Prussendorf in 2005 with top marks in for his paces (9.75) and ridability 9.13. He also was very convincing in his free jumping with 8.25.Fuerst Grandios is from the first foal drop of the Westfalian super star Furst Heinrich, 2003 World Champion Dressage Horses and 3rd of the FN dressage breeding index for 2005.In regards to the sport as well as breeding, Fuerst Grandios carries the valuable genetic combination of Argentinus, the 2005 Hanovarian Stallion of the Year, who produced international sport horses such as: Anka with Marcus Ehning and Arko with Nick Skelton in jumping, as well as Albano with Heike Kemmer in dressage. What is also of interest is the thoroughbred influence from the most reliable dam line of the dressage progenitor Barsoi xx. This stallion produced amongst others Condor Boccerini, who competed at Grand Prix Special, as well as the breeding stallion Bajazzo. In the background we find Grandios, the son of the famous foundation stallion Grande. Grandios son the American dressage stallion Grand Slam was the Oldenburger Reserve Champion. Fuerst Grandios full-brother FIRST FINAL, became Reserve Champion in the 2005 Oldenburg Licensing.The newcomer Fuerst Grandios stands out with an outstanding first year foal crop. With Champions at the foal shows in Bayern and Westfalen presented the first Fuerst Grandios foals of 2006 not only outstanding movement but also brilliant types and correct conformation.Fuerst Grandios finished successfully his 70 day performance test end October 2006 in Schlieckau. With a dressage index of 132.58 and a jumping index of 106.74 for an average of 124.70. He finished 3rd out of 33 and has been successful in his first young horse dressage tests. Another legend in the sport has begun!

In November 2013, we welcomed Alverose Olympia into the world, sired by Royal Olymp out of our beautiful moving TB mare, Miss Blevic. This filly has movement to die for and the most beautiful temperament. 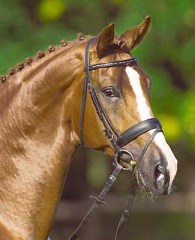 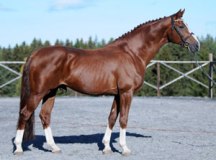 In the following years he was serial winner in dressage tests of elementary and medium level and both at the age of five and six qualified himself for participation in the Federal Championships. In the season of 2004 Royal Olymp managed the smooth transition to success in advanced dressage classes. In the meantime the big framed sorrel easily masters even Grand Prix lessons. We are sure that Royal Olymp is on his way to a great career.

Apart from displaying high athletic capability, Royal Olymp earns lots of scores for his type and an overwhelming personal charisma. His 30-day-test was passed with scores distinctly above the 8.0 benchmark in both part indexes, and the rest of his stallion performance test was demonstrated in a superior way in dressage competitions.
With Rohdiamant and Florestan I, Royal Olymp combines two stallions in the more recent generations of his pedigree who belong to the top ten of dressage horse sires. His dam Farce proved her great talent for sports as Federal Vice Champion of three-year-old riding horses. In 2001 a right sister to Royal Olymp was elected Vice Champion of Oldenburg mares and in the same year was sold to Austria at a top price. Robbie Williams, an approved stallion with victories in riding horse tests is a right brother to Royal Olymp. Super genes also in the dam’s line!

The offspring of Royal Olymp, always true to type, big framed and endowed with good swing and elasticity, often appear on the top ranks of foal shows and meet with ready interest of buyers. Also in 2004 an Elite foal of Royal Olymp captured the hearts of those who watched and made it into the higher ranks (out of a dam by Janos-Dispondeus and bred by Klaus-Dieter Hoffmann from Bollewick).

Already in his first crop of foals Royal Olymp produced an approved son. The shiny black Royal Oak was delivered by a dam by Welt Hit II-Dornpfad xx and bred by Dietmar Scheibert, Dassow. When schooled and prepared for his stallion approval test he convinced everybody by his performance and will complete the ranks of the stud stallions at Kempke Hof.